What is Thermoacoustic Heat Engine?

Today we are going to talk about thermoacoustic engines, which is also called "TA engines". They are Thermoacoustic devices which use high-amplitude sound waves to pump from one place to another.  use a heat difference to produce work in the form of sound waves (these waves can then be converted into electrical current the same way as a microphone does).

(Animation of a standing wave (red) created by the superposition of a left traveling (blue) and right traveling (green) wave)
B. Travelling Wave 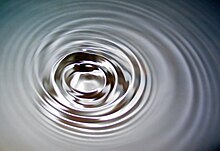 Compared to vapor refrigerators, thermoacoustic refrigerators have no coolant and few moving parts (only the loudspeaker), therefore require no dynamic sealing or lubrication.

Learn more from this youtube video of how it working.

How to Operate a Hermoacoustic Heat Stirling Engine ?

The heat to be applied exactly where the mesh ends inside the tube. When the air inside the tube heats, it expands and cools down, then it heats again and the cycle repeats. At the beginning, the air is not hot enough so the oscillation is slow and weak. When the frequency of the oscillation is matched by the flyweel, it starts rotating. When more heat is applied, the frequency in the engine increases.

When Does Hermoacoustic Heat Engine Invented?

It had come to the history since 1887, when  Lord Rayleigh discussed the possibility of pumping heat with sound. Little further research occurred until Rott's work in 1969. Later Pieter Rijke dscovered a tube which can converts some heat into acoustic energy. He called it "Rijke tube".
An older thermoacoustic hot air engine, where the speaker is replaced by a working piston, is the Lamina Flow engine or Lamina Flow Beta Stirling engine.