It's funny to see people's looks and reactions when their squeeze a little shot for this Mendocino Motor model.
Set the rotor to the board, give it a little light, and then it works like charm.
All of you guests want to know what happen, ice break success. What a marvelous toy!

To be admired and to be talked more from your friends if you have this magic stuff.
This model designed reasonable and compact. You can bring it home, school office with convenient in your bag.

Play steps
1. Bring the model near the window or near a suitable light resource. Don’t put the model on steel desk, it will affect the performance. (set the model 45degree direction under the light resource.)
2. Set the rotor to the board, levitating success on the model
3. Give the rotor a gently push, it will run smooth.
4. The magnet is fragile, please avoid the Magnetic suction to each other and damage.

IMPORTANT INFORMATION YOU NEED TO KNOW BEFORE ORDER:
Obviously, this solar model is highly related to sunlight. The solar panels which equipped on the model convert sunlight to power and drive the model run freely. According to sunlight characteristic, the power from the sunlight is always changing because of sun angle and intensity of the sun's rays. You can’t expect this solar model rotor run in a constant speed smooth. It’s not an electrified product which can set constant speed, and no rotor shake.
In the powerful noon time, the model rotor will run freely, speedily, and stably. Oppositely, it performs a little bad in the morning or late afternoon, because of no enough power from the sun. It may act out no stable, a little shake, run slowly. It may even drop from the shelf board too. This is a normal phenomenon instead of product “defective”, it’s decided by sunlight changing. 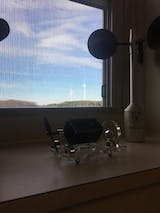 This device demonstrates how super magnets can levitate an object and also how solar energy can be used to make mechanical energy. Great fun to watch!

It's fun to watch it start to spin in direct sunlight

The kit was what I expected.
Very nice!
Keep the good work.

C
Customer
Unit is out of ballance and wobbles significantly even at low speeds.

Planning to find small weights to balance myself.